Protect your data even before your computer boots up

Toshiba Smart Data Encryption (SmartDE) goes beyond standard encryption – shielding every area of your hard drive, including all your system files, and your OS. Even if you remove your HDD, the files will still be encrypted. And if your PC gets into the wrong hands, they won't even be able to initiate start-up. So whatever brand of laptop you have, take your protection to a new level - install SmartDE.

Prevention of information leakage through encryption of all the HDD areas 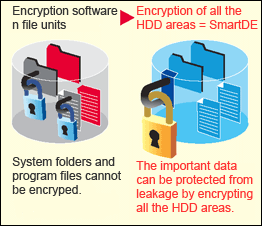